The Evolution of the Wedding Dress

An age old ceremony all about love and companionship, weddings have a long and detailed history spanning hundreds of years. One of the most memorable things about every wedding is the bride’s wedding dress. Whether a fashion faux pas or the most beautiful outfit any of the guests has seen, the wedding dress is something guests and the star couple remember for years to come.

Did you know: Wedding dresses haven’t always been traditionally white. It was only in 1840 when Queen Victoria married Prince Albert that white became the colour of choice while also symbolising purity (although white had been popular among the wealthy before then).

The wedding dress as it is today, although taking inspiration from previous incarnations, is very different from those of the past. Almost 100 years ago, wedding dresses in the 1920’s were all about looking like royalty. As the first year of the decade saw women gain the right to vote, wedding dresses changed from heavy, ball gown styles to lighter straight lace and silk wedding dresses. Infamous fashion designer, Coco Chanel, also introduced a controversial new style, creating a short wedding dress with a long tulle train. 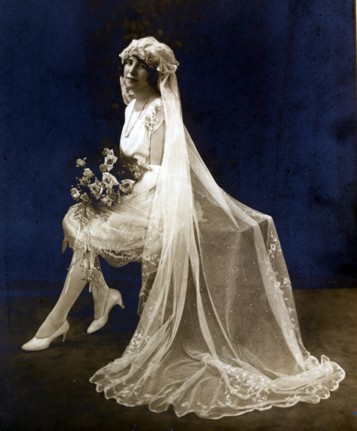 Heading into the 1930's, dresses became more simplistic as a reflection of the depression and the onset of World War II. The dresses hugged the body more, hems were lower and trains were longer. Dresses weren't as expensive, but still had that regal elegance and white hues, characteristic of a traditional wedding dress. 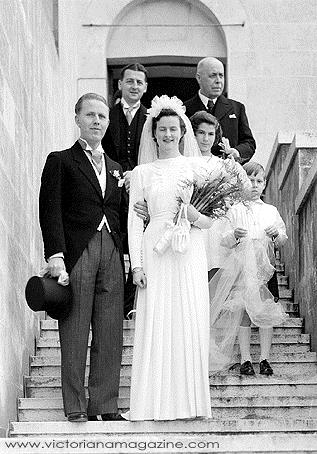 The more simplistic wedding dress of the 1930's.

As the war came to an end, people began to have more money again, wedding dresses became more ornate and a little more unusual in the 1940’s. Long ball gowns reappeared and pearl and crystal appliques appeared for the first time. Some brides even discarded the traditional white dress for more brightly coloured styles in pastel hues.

The 1950's and 60's saw further change to wedding dress fashion. Dresses became more fun and flirty, with a full skirt but a shorter length. However, some women were more traditional, choosing long, full dresses, made more youthful by being on the shoulder or strapless. The 1960’s also favoured more modern styling, with everything from long sleeves and long trains to short mini dresses worn by brides around the world! 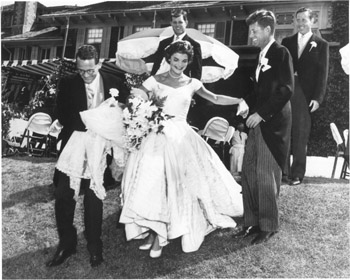 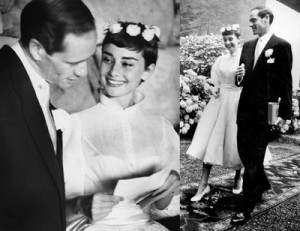 The 1970's were all about two polar opposites – flowing and free, and corporate and clean. Many celebrities donned two-piece suits, while royalty and musician’s muses donned hanging, graceful dresses with long, puffy sleeves and various head wear. In the 1980’s, wedding dresses harkened to years past, with big ball gowns in whites and creams being very popular. Much loved royal, Princess Diana, set the scene for the decade, with a floor length ivory silk wedding dress with poufy shoulders, lace V-neck and a 26 foot long train. 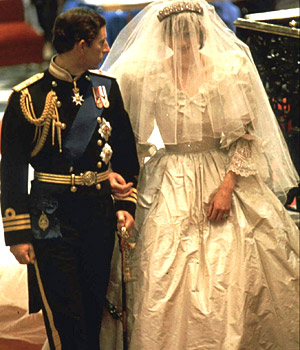 Just over a decade ago, the 1990’s saw women wearing all kinds of wedding dress styles, but typically sticking to a white colour scheme. Some brides went for a modern look with figure-hugging gowns, while others chose classic off-the-shoulder bodices, sweetheart necklines and ball gown skirts. Coming into the 2000's, strapless wedding dresses became the next big thing. Dresses were relatively traditional, offering full skirts and long trains, but also offering a little hint of skin along the collarbone and shoulders. However, just like the 1990's, many women also chose unusual dresses, like figure hugging gowns and short dresses.

Now, the trend in wedding gowns is to be inspired by the past while also true to the modern day. Dresses come in all styles and designs. Many women prefer to get it made for them in order to have a one-of-a-kind design.

If you are looking at designing your own dress and would like some help to choose a fabric to suit you, call us or visit out our bridal section online or in-store.

View fabrics and trims for brides.

View fabrics for bridemaids and mother of the bride.