Benson & Clegg
Add to Wish List
£69.90
Skip to the end of the images gallery 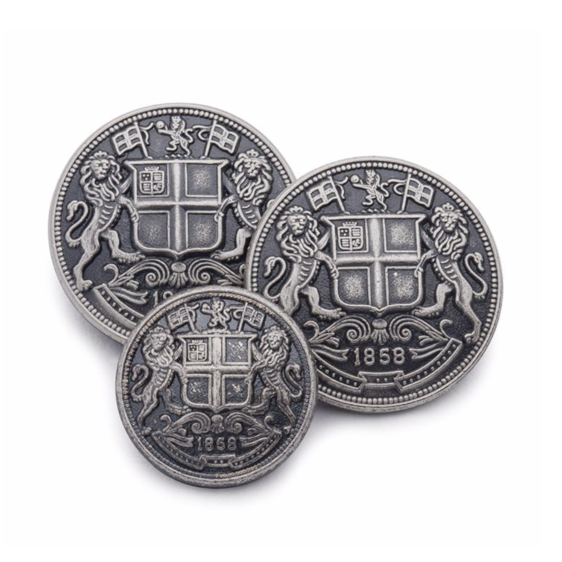 zoom
Prev
Next
Skip to the beginning of the images gallery
The details
An antique silver single breasted 'East India Company' button set by Benson & Clegg. The East India Company was formed in England to pursue trade with the East Indies, but which ended up trading mainly with the Indian subcontinent and China. The company rose to account for half of the world's trade, and also ruled the beginnings of the British Empire in India. The company received a Royal Charter from Queen Elizabeth on 31 December 1600, making it one of the oldest companies in the world. The company eventually came to rule large areas of India with its own private armies, exercising military power and assuming administrative functions. The company was dissolved in 1874 by which time the official government machinery of British India had assumed its governmental functions and absorbed its armies. Double breasted option available.
Delivery and Returns

All orders are inspected and delivered to you in perfect condition.

As fabrics and trimmings are cut to your specification, orders are non-refundable once cut. Accessories (cufflinks & buttons) may be returned for refund within 14 days of receipt if in perfect re-saleable condition

We endeavour to dispatch orders as soon as possible, however there are occasions during busy periods on which delivery may be slightly delayed.

Founded in 1937 by Harry Benson and Thomas Clegg, Benson & Clegg has become one of London's most well-known and respected providers of true bespoke tailoring for the modern gentleman. Granted a Royal Warrant in 1992 for the supply of buttons, badges and military neckwear, Benson & Clegg provide that finishing touch for a smart and stylish wardrobe.

Our fabric customer care team are available Monday to Friday between the hours of 9:30 - 5:00 and ready to help.